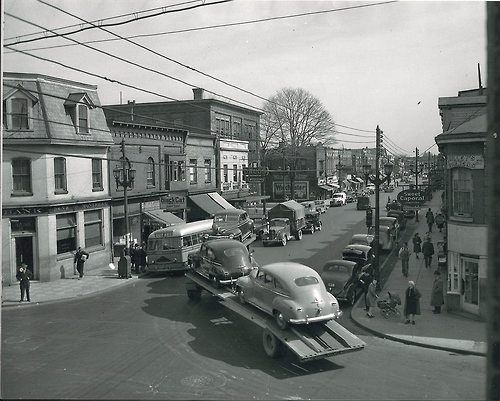 Recent scholarly studies suggest that sights, sounds and smells from our past can evoke emotionally charged memories.

For example, the sound of children playing outside could bring back fond memories of playing on a schoolyard, while the sound of a dentist’s drill might remind you of “scary” visits to the dentist as a child. And visiting a landmark from your childhood will no doubt remind you of time spent there.

As the holiday season approaches, I got to thinking about some of the sights, sounds and smells that I remember from Christmases past. Things like neighbourhood Christmas Tree lots, the annual Santa Claus Parade, singing Christmas Carols at school and the smell of a Christmas turkey cooking in the oven.

This led me to reminisce about the broader myriad of familiar sights, sounds and smells which were a part of my everyday experience as a child growing up in London’s industrial East End in the 1950s and early 1960s

To be sure, many of the sights, sounds and smells from my 1950s working-class upbringing would be foreign territory to most children in 2018.

One of these sights/landmarks is Ealing Public School which I attended from Kindergarten until Grade 7. Driving by the historic school today conjures up many childhood memories including playing marbles with my pals on the schoolyard, community Christmas Bazaars, a school assembly during which I and some friends dressed up and lip-synced the words to the Monster Mash on Halloween in 1962, Field Days, and the time I got the strap for spitting on my younger brother.

It saddens me to hear that Ealing may be closed due to declining enrollment at some point in the near future.

Another landmark was the old General Steel Wares building that I walked by everyday on my way to G.A. Wheable Secondary School. It was immense and straddled both sides of Adelaide Street. Once known as McClary Manufacturing, the firm manufactured home appliances like stoves for years. It is long gone.

Then there’s Silverwood’s Park where my friends and I spent our summers in the public pool and our winters on the outdoor skating public skating rink. 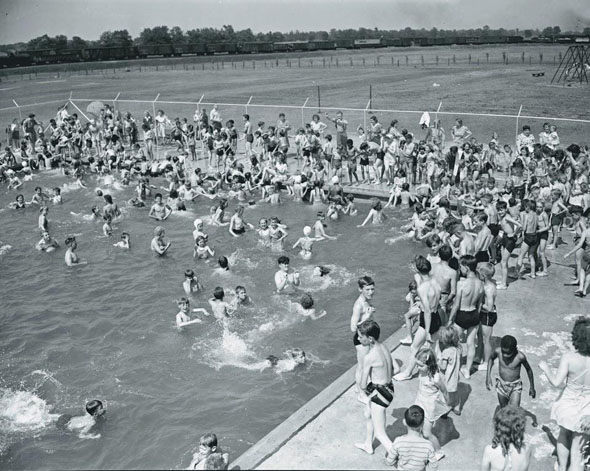 One of the sounds I remember were the factory whistles which went off several times a day to mark the starting times, break times, Lunch time and quitting time at the factories and plants where many of our parents worked.

Another sound were the steam and diesel locomotives that chugged their way through my neighbourhood several times a day and blew their whistles as they came and went.

One of the sights I recall vividly was the moving of retired steam locomotive Engine 86 from the CNR shops at York Street and Rectory Street to Queen’s Park on the Western Fair Grounds in 1958.

The move took four days using sixty foot sections of rail, which were moved from the rear to the front as the locomotive was pulled along with a winch. Its progress was covered in great detail in the local media.

Once located at its permanent location facing Dundas Street, the engine soon became a popular attraction for East End children. I spent many hours clambering over the locomotive with my friends and ringing its bell incessantly.

Alas, it was all too good to last.  The Public Utilities Commission disabled the engine’s bell after late-night ringing awakened the neighbourhood, and later sealed its smoke stack after a kid was found sitting in it. Today, Engine 86 is enclosed behind an iron fence sending the message that it is off-limits for any curious child. 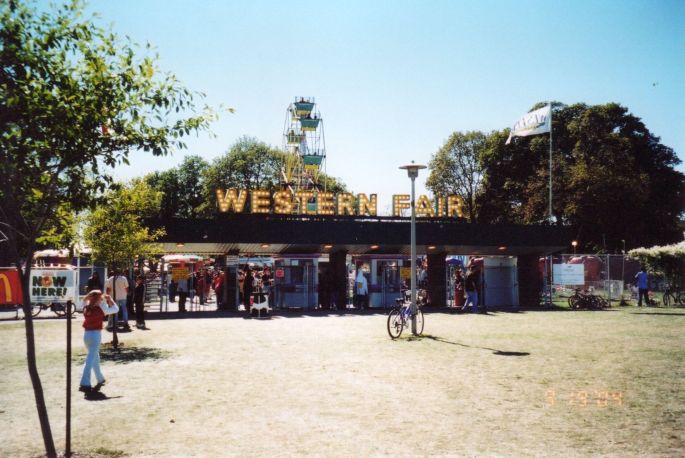 Although it has fallen on hard times and become increasingly irrelevant in recent years with competition from bigger, better out-of-town attractions, the annual Western Fair was a big deal for kids growing up in the 1950s and early 1960s. We were even given a day off from school – Kid’s Day – to take in its sights, sounds and smells.

To be sure, the Fair was the ultimate sensory experience for London and area kids of the pre-digital era. Sights I remember include the crowded midway and rides, Crown & Anchor games, displays of farm equipment, free grandstand shows and farm animals there for the petting.

Sounds I recall were people screaming as they went around and around on the Himalaya, a very popular ride, and as they steered towards each other on the Bumper Cars.

The smell of onions frying today takes me back to the Western Fairs of my youth as does the “greasy” smell of french fries, corn dogs and other deep-fried delicacies.

I could go on and on with many more memories, but I think you get the drift, Dear Reader.

This holiday season, take time to recall the sights, sounds and smells of the past and make some new ones for the future.

(Editorial Note: Do you have some of your own historical sights, sounds and smells you would like to share? Please feel free to share in the Comments section of this Blog. Thanks.)

2 thoughts on “Remembering Sights, Sounds and Smells from the Past”

This is a text widget, which allows you to add text or HTML to your sidebar. You can use them to display text, links, images, HTML, or a combination of these. Edit them in the Widget section of the Customizer.
%d bloggers like this: